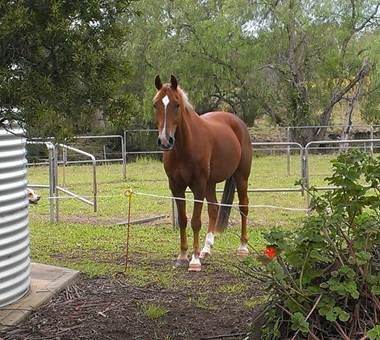 Marg Pryer explains how Fight Back has helped her horse River with his severe allergies and long term use of steroids:

“This is River, an Australian Stock Horse and he is 17 this year. I have had him since 2009. I moved from WA in the Kimberley to Kingaroy Qld 6 years ago. Approximately 2 1/2 years ago he developed an allergy particularly in his mouth which is swollen from the allergy. He has been diagnosed with “Equine Eosinophilic Granuloma Complex” (apparently more common on the body)

We tried herbs, then took him to Gatton University where they prescribed steroids and said go find what he is allergic to. Sadly, we couldn’t find what the trigger was but now his immune system is so compromised from long term steroid use that pretty much anything can be the possible cause of flare ups. I enlisted a holistic practitioner who developed a plan which looked like it might work but I was still relying on the steroids and he was at risk of developing Cushings as a result of this.

I had got to a point of seriously considering putting him down due to cost and the steroids were going to kill him and Fightback was my last resort after throwing an awful lot of money at him already. I found Fight Back in October 2017. This truly was his last chance.

Initially all his hair fell out as I reduced, then stopped giving the steroids in the first month. He has only ever needed one steroid shot since starting Fight Back and that was due to a run in with I believe was a hairy caterpillar!

He still displays signs of the allergy as his body has never been able to get him back to normal and struggles to heal (due to long term use of steroids) but he is now back Campdrafting and doing well. His mouth is most affected by this allergy and sometimes flares up so I just double the dose of Fightback on these occasions and he returns to his normal. He also looks great for his age too!

I am so glad it has helped though I feel he will be on it for the rest of his days as not game to take him off it. I have never found what causes his allergy!" 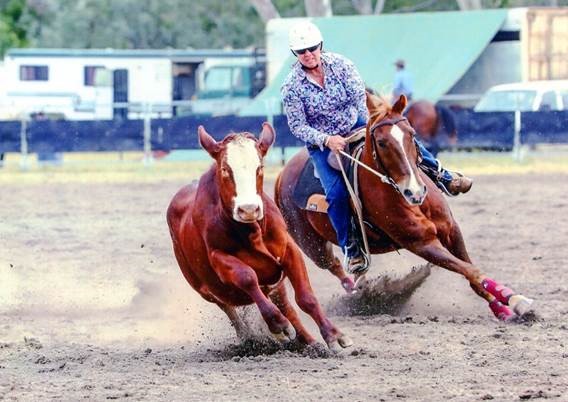 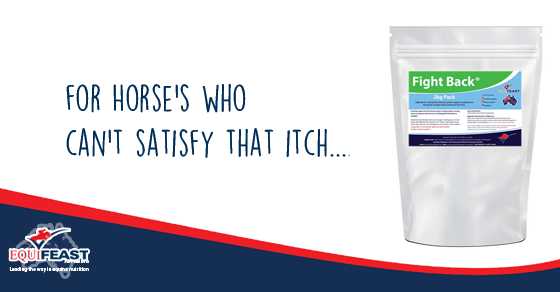 In this video, Glenda McIntosh of RDA Tweed Valley, explains how EquiFeast products Break FREE and Fight Back have helped Frankie to overcome his issues with Queensland Itch.

'Fight Back saved my horses life!'

‘My horse is allergic to alfalfa, brome, wheat, corn, weeds willow and oak, 29 out of 60 things tested on her labs. She is also PSSM1.

I live in Alaska and the bugs make her welt. She would get horrible hives, and that’s just what we can see! They get them inside too.

I had tried everything. Dex only worked while she was taking it and continuous steroids create their own issue. I was really thinking I would have to let her go. Her misery was just too much.

That’s when I came across an ad for Fight Back. It has my hail Mary last ditch effort.

She has gone a full year with no hives! It took a little time to figure a maintenance dose. But we have her allergies under control! I tell anyone and everyone with horses that get hives to give it a try! ‘ 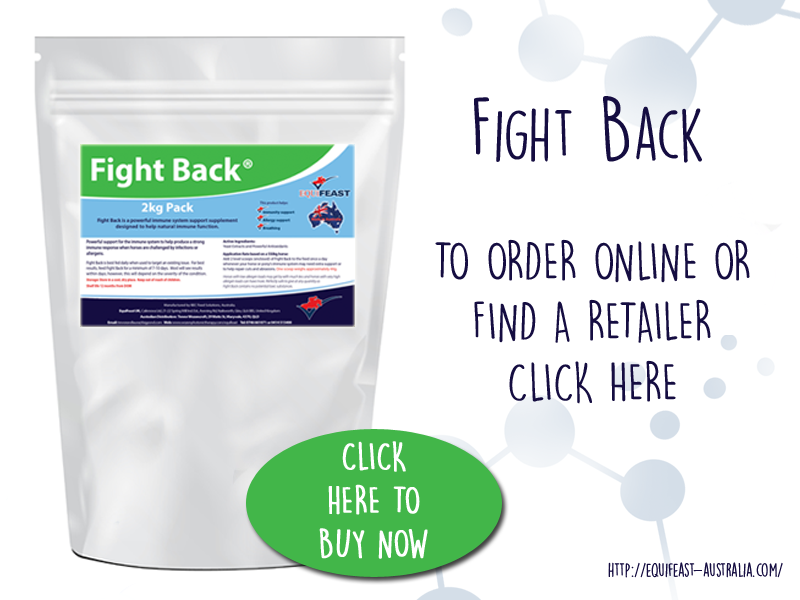